This is a cautionary tale about too easily accepting assertions and rumors as fact.

The story starts exactly 58 years ago today, when I was a senior in Lenape High School in New Jersey listening to the announcement that President Kennedy had been shot.

A few days later, I drove with friends to Washington to attend the funeral procession. Seeing the cortege with my fallen president’s casket pass by was an unforgettable emotional experience.

When I returned home, I was so moved by the famous photograph of JFK Jr. saluting his father, that I painted a watercolor version of it:

The following year, I was fortunate to win a full Navy scholarship to the University of North Carolina at Chapel Hill to study physics.

I spent almost four years training on active duty and in school.  In a Midshipman flight program, I had gotten as far as a few hours of solo and had orders to the Navy Flight School in Pensacola, Florida.

However, I had to take a medical leave from the program with the intention of returning to the navy, when I was well enough. Not sure I could return, I felt shame that I had let my country down after all it had given me.

But a few months later, the assassination of Martin Luther King and Senator Robert Kennedy began a long string of events that eventually led me away from the navy toward the radical left.

One of the most influential events for me was seeing evidence in a radical 1970’s newspaper that a former CIA officer, E. Howard Hunt was involved in the murder of President Kennedy. (Many decades later, Hunt’s son shared a video of Hunt’s death bed confession that he had indeed been involved in what he called the “Big Event.”)

I also learned what a dysfunctional misguided mess the left can be. That revelation along with multiple amazing paranormal experiences led me to put politics aside and pursue my interests in writing, graphics and movies.

As a result, I moved to Los Angeles and started a 40 year career in movies and TV on set and off, creating and programming graphics, animations and videos for scenes where actors interact with screens large and small.

Here’s part of my memorabilia collection consisting mostly of my invitations to “Cast and Crew” screenings held after shows have wrapped:

Although I was focused on making movies, my feelings about the murder of President Kennedy were rekindled, when I heard of his son’s death in 1999. And then last year, I was surprised and hopeful, when I heard a conspiracy theory that a military team loyal to his father had helped JFK Jr. fake his own death.

Basically, the story is that loyal flag officers (generals and admirals) and other patriots developed a multi-decade plan to take the country back from those who conspired to murder President Kennedy in what was essentially a coup by nefarious domestic and international forces.

Those same dark forces made plans to stop JFK junior’s assured victory in his upcoming run for Senator from New York in 2000, by eliminating him and installing Hillary Clinton in his place.

When the loyal flag officers heard that the dark forces were plotting to kill JFK Jr. in 1999, they arraigned to help him and his family fake their deaths in the mysterious nighttime crash into the ocean of his private plane.

Still angry about the assassination of my president, I hoped that this conspiracy theory would turn out to be true.

Months before the 2020 election, I heard the claim that JFK Jr. would only reveal himself when “Joe Biden is gone.” It was a statement that didn’t make sense to me. Since Biden appeared to me to have no chance to win the presidency, he could pose no threat to JFK Jr. But then, with Biden now as president, maybe…

In the meantime, a bizarre clue that JFK Jr. really is alive appeared in my email yesterday.

First, let me explain that I happened a few days ago to hear someone on the Internet say they believe JFK Jr. is alive and playing the part of a man who claims to be master falconer, Alan Parrot:

I looked up Falconer Parrot, who says he comes from New England, which could be an excuse to explain any similarities in accent with JFK Jr.

Falconer Parrot allegedly came back to America after spending decades in the Middle East hob-knobbing with elite royal families, who are obsessed with falconry. In the process, he allegedly learned secrets about the presidencies of political luminaries like the Clintons and Bushes that indicate they were ultimately controlled by the same dark forces that killed JFK.

If that’s true, the Alan Parrot character could be cover for JFK Jr. to dish dirt on his political enemies after decades in witness protection. And Parrot’s look could certainly be a convenient way to totally disguise JFK Jr.

But I asked myself where and why would he get the strange idea to choose falconry, as his cover profession? And who could he trust to teach him the ancient art?

Then the answer magically appeared in my list of yesterday’s unread emails: 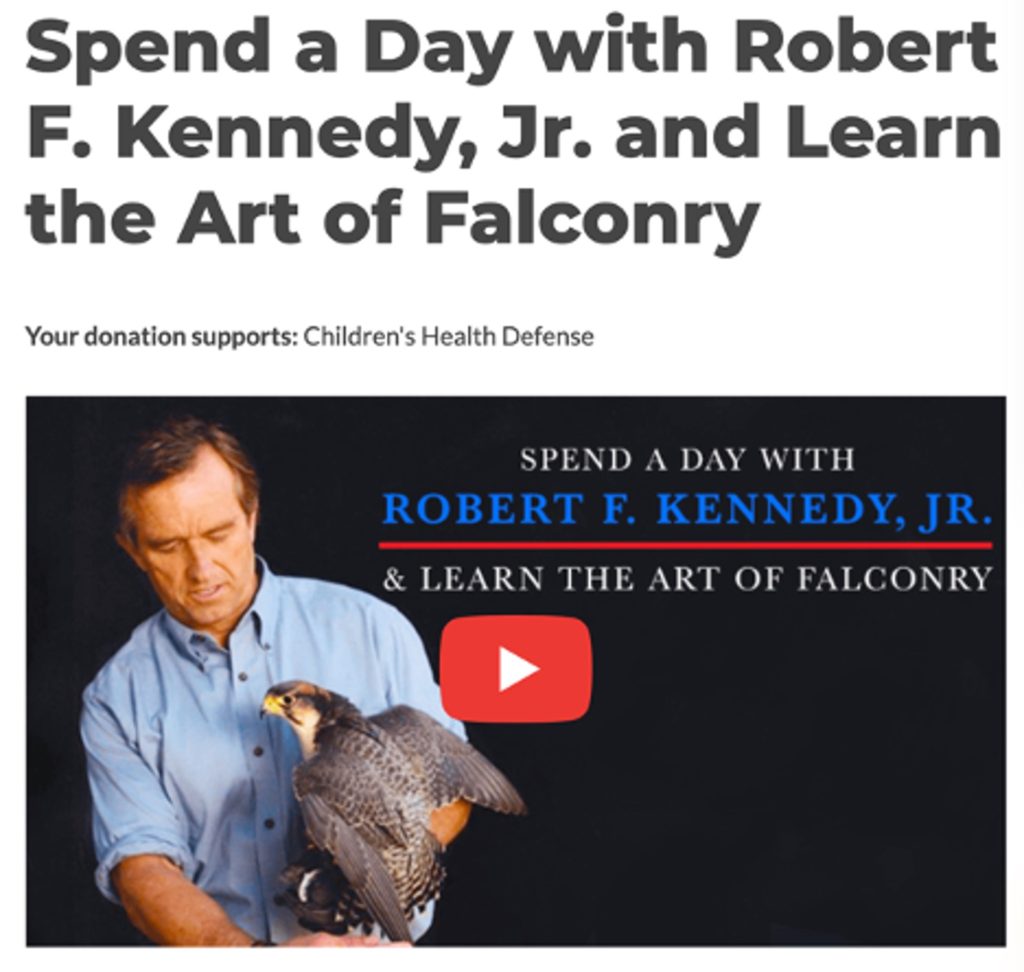 JFK Jr. mystery solved!!  On the 58th anniversary of his father’s murder, it all came together with great synchronicity in a matter of a few hours!  There’s no way this could all be a coincidence!

Very excited to see John junior alive and talking, while wearing a silly disguise, I found videos of “Alan Parrot” to watch.

And I was disappointed to see that Alan appears to be a real guy, who really is a Sikh with a long history as a falconer and a documentary that apparently gives a reasonable explanation about how he came to learn nasty high level secrets.

Lesson learned about too quickly buying into a “conspiracy theory.”  It’s a good reminder that we should have solid evidence before making final conclusions about such things.

In any case, to support RFK Jr’s charity Children’s Health Defense, I entered his contest. After I made my donation, I was given the opportunity to post a brief message for him.

What to say? Then I remembered a live streaming interview with RFK Jr. when someone posted in the chat -“Touch your nose, if JFK Jr. is alive.” Without hesitation, RFK Jr. touched his nose and kept talking.

So I wrote: Touch your nose if you’ve shared Falconry secrets with Alan Parrot 🙂

I’ll let you know, if he gets back to me on that.

Speaking of supporting good causes, you can support The FineDay Academy by purchasing one of the items in the campus store. For example, you can purchase a copy of Watkinson’s JFK Jr. painting here.

This post can be accessed from various sections of the FineDay Academy.
You can return to the section you left here: